Did You Know Ontario Has 2 Housing Markets That Are Among The Hottest In The World?

As the summer heat finally reaches our part of North America, the housing market temperatures continue to rise as well. We all know that Toronto is the most in-demand real estate market in Ontario. Little did we suspect, however, that Hamilton, ON, has been gradually showing outstanding growth in its home price gains.

In fact, it has recently hit the Top 10 on the list of the 150 hottest real estate markets worldwide.

Toronto, one of the world leaders in real estate price growth, saw home prices rise at a rate that ranked it as fourth-fastest on the 150 cities list. And while Toronto is still in the lead, it was followed close behind by a nearby Ontario city, which is not even part of the GTA.

Hamilton, which made seventh place on the list, has been recently compared to Brooklyn, New York. With a 21.5% yearly climb in prices (Toronto has shown a 24.8% climb), the comparison is hardly surprising. Just to put things into perspective, the average on the 150 hottest real estate markets list is a modest 6.9% price growth in the last year.

The three top cities that outranked Toronto are all in China, with the top one exhibiting housing price growth of almost 32%. Between Toronto and Hamilton, on the fifth and sixth place, are two more Chinese cities. 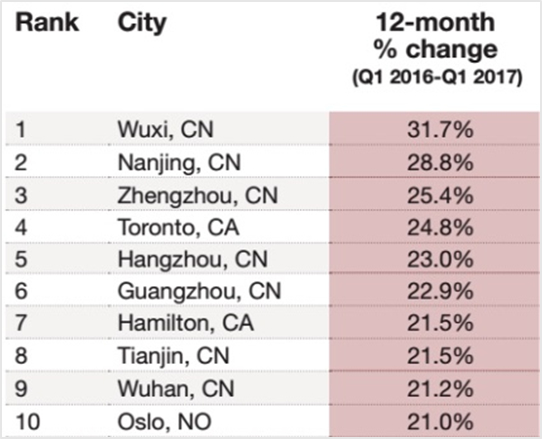 At the same time, investors should not be overjoyed, because the recently introduced foreign buyer tax will likely drive Ontario entirely out of this prestigious list. Just like it did in Vancouver, where a similar tax was put in place for the Metro Vancouver area in August last year. It is recovering, but slowly and will not likely regain its previous status on the list.

Back to Ontario though. Hamilton is a far less expensive market than Toronto, despite the high rate of price growth, which is why it has been attracting buyers of all categories, from homeowners to investors and everything in between. This rise in demand has been one of the major causes for the price growth, but not the only one.

In addition to this rise in demand, there is also a lack of supply. Construction and development in Hamilton are far from stellar in scale, and this shortage is also affecting the prices. To show the overall scale of this phenomenon, Ontario has seen only 63,302 new homes completed last year, which is hardly enough when the population growth in the province was a net of 185,906 people.

The bottom line is, that Hamilton is a great place to buy a family home, but investors should be careful, as this rapid price growth may not last for too long.

Stay with us for additional updates on housing, investment markets, and everything real estate.

Back to all news

If you are looking for exceptional services from a boutique agency that supplies extraordinary solutions to your needs, Elina Katkova is your best choice. Feel free to call us now and we will do our very best to accommodate your next real estate endeavour.